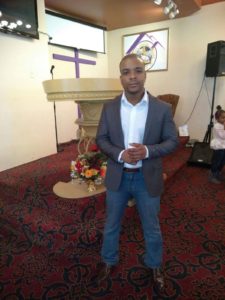 This has been Apostle Paul Simmonds’ mantra as a Christian soldier over the past six years in ministry. He is determined that he will not relent in spreading the Gospel of Jesus especially after having a Damascus Road experience and subsequently seeing Jesus Christ face to face. He often shares that he was appointed by God Himself who visited him in his room and called him Apostle and specifically outlined the mission he has set before him as a servant.

Apostle Simmonds was born in rural Jamaica in the early 1980s to parents who were evangelical Christians and who spent significant time in prayer for their children. Apostle Simmonds is the second of seven children but he was not engrafted in this practice of Christianity in his teenage years like his siblings. Instead, he would find himself in constant fights and conflicts which resulted in him leaving Jamaica to the United Kingdom at age 18 in order to preserve his life.

In his early years, he served in the British Army for a number of years and subsequently got an honorable discharge. He was confident in his abilities as a self-sufficient young man and went into entrepreneurship which gained him a lot of popularity and fame as his business ventures grew. The faithful prayer of his parents kept him even while he charted an ungodly journey of immorality and unrighteousness. Apostle Paul Simmonds hit rock bottom when he was left alone in a lonely British prison being stripped of everything he acquired while in the world of sin. His friends disappeared and out of desperation he called out to God saying, “Lord, if you help me out of this situation I will serve you for the rest of my life”. To his surprise, a voice answered saying, “I am God and I am to be worshipped even without me helping you”. That was the beginning of a supernatural lifestyle. This journey has been characterized by encounters such as him seeing Jesus Christ himself, angelic visitations, prophetic dreams, and revelations which have helped to usher him in ministry as a deliverance minister.

During those lonely days in isolation, Apostle Paul Simmonds diligently studied the scriptures and developed a relationship with Jesus Christ. During this period of his life, he would constantly remember his father’s voice saying, “Son I gave you to God and if you will not come by choice, you will have to come by force”. The impact of his father’s prayer was far-reaching and preserved him from death even though the road he traveled was a deadly one that only a few survived.

Undoubtedly, the fire of God is shut up within the Apostle’s bone like the prophet Jeremiah. It is with great passion that he preaches and teaches about the fire of God and the importance of practical Christianity to the body of Christ. He strongly believes in deliverance from demonic oppression and teaches people how to receive and maintain their deliverance. He is also a spiritual mentor who is eager to share with fellow Christians the revelations he received from the Holy Spirit. He operates in the five-fold ministries by the divine leading of the Holy Spirit. He is totally committed to the undiluted Gospel of the cross and has pledged to keep serving the body of Christ. His mission is to be the voice of God on the earth.